Pamela Capone, born in the heart of Los Angeles, was the youngest of nine children orphaned by their biological parents. Taken in by her foster parents at 18 months old, to this day Capone considers herself a rescue, and her adoptive parents heroes.

A self-professed people watcher, Capone has been inspired by the “misunderstood” Mrs. Kravitz of the classic sitcom Bewitched, who Capone claims wasn’t nosey, but a pioneer who cared. A self-contained Neighborhood Watch, Mrs. Kravitz was a trailblazer, encouraging timid little girls like Capone to be curious.

Capone is a daughter, a sister, a mother, a wife, a friend, an avid supporter of IMA Guatemala, an actor, a public speaker, an evidence gatherer, a dot-connector and an author. Her second book, I Punched Myself in the Eye, released in 2015 and follows her debut title, The Little Girl Within: Overcoming Memories of Childhood Abuse and Abandonment, which chronicles Capone’s life beginning with her first memory of being placed in foster care.

Pam is working on her third book, which is her second in her personal essays series of true stories. Pam believes we’re living in some pretty divisive times, certainly the most bitter and corrosive in her lifetime. Pam’s writing is a counter-action to the rancor in our society today—a subtle “push back” against the hate. With an emphasis on love, she weaves in various and related topics while using humor, depth, and spirituality, using examples in every day and sometimes extraordinary circumstances.​ 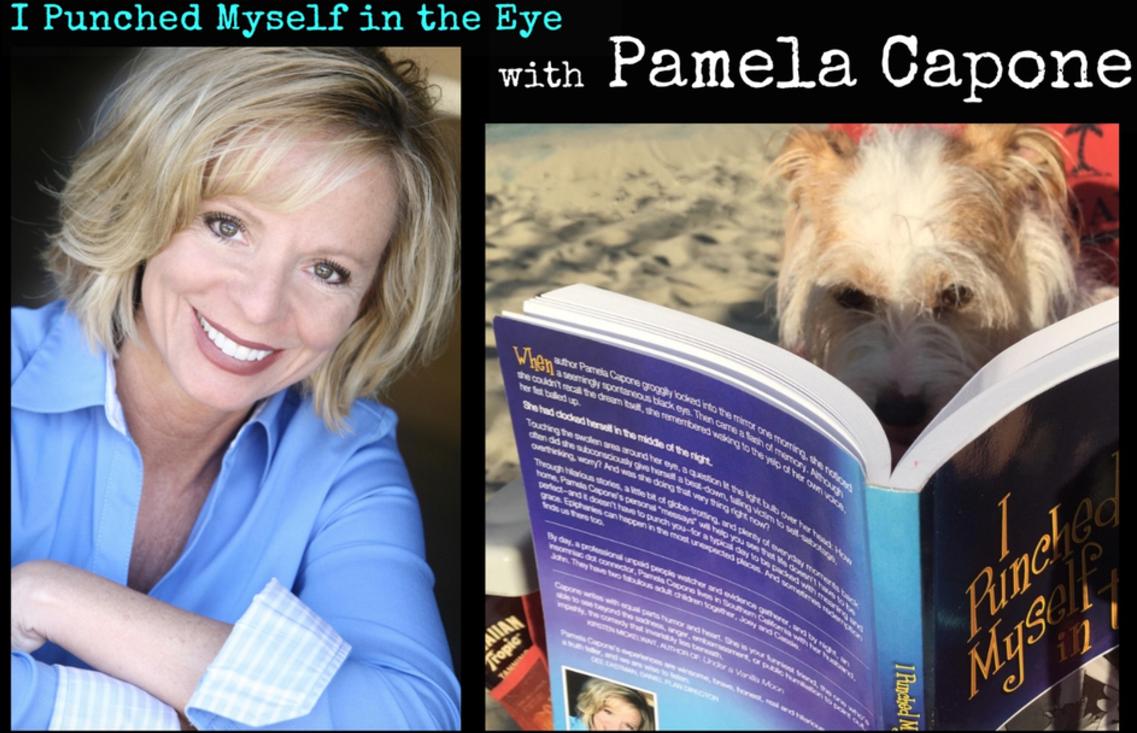 ​
In elementary school her teacher would give her writing assignments. It has been said before that an assignment of any form as a young child would put a damper on the day but it felt like recess to Pam. She felt most alive and in touch with her true self and full being when she writes  and as an adult she continues in the enjoyment of her craft.

Anne Lamott, a progressive activist and writer is at large a huge influence in Pam’s writing. She feels a deep connection in the ability for Anne to combine honesty, humor and depth in what she says, writes and stands for.

“Humor plays a big role in my writing. Also, I think my writing is a little reminiscent of the show, “Seinfeld.” They said that Seinfeld was a show about “nothing.” I see my writing as a collection of seeming “nothings” that point to big somethings. Little things that often get missed, I notice. And then I write about them.” - Pamela Capone

Genuine and forthright, heard but collected, Pamela Capone is one of the most likeable voices I have personally had the chance to hear in conversations and through the words in her books.  As I giggled reading her typed outbursts in the pages of her book, “How I Punched Myself In The Eye” I also saw a reflection of an honest person that I could relate to.  Her vision in the way she speaks out loud can be heard in silence.

“One of the most consistent comments I get about my writing is about my “voice.” People say that I write the way I speak, that they can almost hear my voice when they read my words. I speak in simple language that I think reflects my authenticity. I believe if I’m not going to be “real,” there’s no point in writing.” - Pamela Capone

Having the courage to write about the personal experiences of her life is impactful and can change another’s life.  The first book Pam published was “The Little Girl Within: Overcoming Memories of Childhood Abuse and Abandonment”.  She was able to release how it felt to being placed into foster care and the memories that came with it.  Pamela Capone has taken her stories and her memories to create pieces of art that speak loudly for all to hear.

Besides being an author, public speaker and actor, she is an avid supporter of IMA Guatemala. Being a sponsor coordinator here in the United States, she shares how it takes such a huge chunk of her heart, connecting students with their sponsors and getting to know them personally.

The world needs more love and needs new ideas to help change it.  With the support from writers like Pamela Capone there is only opportunity to help each other through words that can be forever life changing.  Her heart is of gold and she unknowingly is making a huge difference from every word she writes.

Check out "I Punched Myself In The Eye"  Web Page

Love is the answer to all the questions in the world and peace is found in many forms including art and poetry.  To have the courage to share inner vulnerabilities and truth between reality and what we daydream is a powerful movement between the heart and the mind.  When I write for Skyepoet I tend to share the stories of artists who have made a difference in this world and choose to promote love, kindness and forgiveness.  After reading a book written by Pamela Capone, “I punched Myself In The Eye”, I could not wait another moment to learn more about who this author was.  An artist in another form, Pamela paints the world with her beauty through words.  The personal stories and comical babble blend together producing an amazing book of short essays we all can relate to.

Pamela was born in the heart of Los Angeles and the youngest of nine siblings. Although orphaned by her biological parents, she was given a gift and entered the world as a writer.  At eighteen months old, she was taken in by her foster parents and adopted into a family of heroes who she feels rescued her.  At that moment she felt hope and in a world that she believes needs sweet love now, she too gives hope to her readers she shares her stories with.

“I’d like to give people hope. My goal is to engage people with my humor and my hope. I’d love for readers to be inspired by my examples of epiphanies in unexpected places, meaning in the minutiae. Sometimes it’s in the tiniest, non-flashiest moments that provide the greatest messages and meaning.” - Pamela Capone

A world without literature is unimaginable to Pam, for it is the very blood that runs gracefully through her sharing artistic events and experiences with the world.

“I cannot imagine a world with literature or art of any form. It makes me think of the movie, “La La Land.” A world without art would be void.” - Pamela Capone