From first look, the paintings of Preston Craig are tragic, comic like and more of an escape than an endeavor towards the birth of romance.  Giving a few minutes to absorb the chaos behind the truth in human nature, we tend to overlook the beauty in the forgiveness of being human.

Born in Baton Rouge, Louisiana, Preston Craig had already started a revolution from birth with the social sensibilities within his own mind.   A leader and innovator in freethinking and freedom within us, coloring outside the lines always made more sense.  Presently residing in Topanga, California his strong beliefs in the rights of society remain as he was set here on Earth to identify and help destroy the injustices we live with everyday…and with art.

As a child, Craig loved crayons and would take newspapers and seek out the black and white pictures to color only sharing the endearing irritation from his mother. He was most influenced by his mother’s half-sister.   She was an artist and was most creative with oils and pastels and whenever she visited from Texas, he would find himself enjoying new art supplies.  Time would be the cue for investment in his progression.

“My mom saw something in my efforts as well and paid for one of those drawing by mail courses, much to the consternation of my dad. I guess art ran in my veins because my mom told me my grandmother used to take old tintype photos and enlarge the images into a charcoal drawing, which I am told were quite good.” – Preston Craig

As a member of his high school art club, Preston had advanced in his art classes with the training he not only had form his school but the influences that brought him there.  He graduated high school and enrolled in The University of Louisiana studying Graphic Design & Illustration, later earning his B.A. specializing in Illustration.   Craig began his own adventure in the discovery of his works with a strong diversity in tastes of art.  While he appreciates the social commentary of the comics of R.R. Crumb and the surreal worlds of realism of Salvador Dali, he has all reasons to love the complex beauty in the fantasies displayed in Maxfeild Parrish’s artworks.  One of the highlights growing up was the discovery of his late ancestor, James Craig who was the Royal Architect of the city of Edinburgh in Scotland.  The entrance to the city is decorated with honoring plaques and the influence of this later on in life was a proud discovery and another influence to the innovative.

With such powerful influencers, Preston’s artistic mind falls short of apathy to the ignorance within social justices.  Preston Craig aims high in the attention and education not only in this direction but also with his passion in addressing social issues plaguing society.   He enjoys interacting with all people and passionately fights for our environment and the people he loves in it.  The world’s lack of utilization in understanding and acceptance of  surrounding justice only offers opportunity for injustices to be addressed without walls.   Preston Craig’s connection to the idea of creating art that acts as guides that not only identify the lack of justice in our world but the ongoing social issues ignored.

“I have a strong sense of justice and utilize some of my art to address injustices in society, and I care a great deal about saving our planet from corporate greed, pollution and global warming.” – Preston Craig

Twisted Teddys TM was created to address social issues using social commentary that continues to provoke curiosity and interest through raw and explicit works of art.   He puts much thought into the path of his company and makes sure that a portion of all sales from his art and merchandise is dispersed between programs that address the issues depicted in his Twisted Teddys TM  paintings.

“My goal with my company is that it will become so successful both monetarily and by educating people on creating positive social change, that the issues I am targeting will be solved and no longer be an issue.  That is what I wish my legacy to be and that is what I am working towards.  I will continue to create and exhibit my conventional art (landscapes, portraits, fantasy) as well but I feel my legacy will be established with Twisted Teddys.TM” – Preston Craig

Preston could not imagine our world without art and the concept of no artistic culture would mean the lack of storytellers and creators.   He believes that it is humans that are the artistic culture sharing with the world creativity even if there is darkness and light.

“It would mean we would have no imagination because imagination is a creative force.  Without that, we would be no better than machines.” “Conversely, imagination and creativity can also lead to destructive uses.  It’s what makes us human. We can go from the sublime of a masterful musical piece, play, book or visual image to the destructive nature of a nuclear warhead.  All very creative though we would all be better off without the latter.” – Preston Craig

Preston shares that the world could use more tolerance and the acceptance of one human race rather many, less “white privilege” and more education on their racism and what he states are bigoted ways.

“It is ingrained in some people so deep, that they don’t even realize their thinking is bigoted or racist.  Art can help by being socially relevant and by addressing those issues continuously.”  “What makes the world great about art is that it connects humanity in an unspoken language. One does not have to speak the same language as another individual in order to appreciate great art (visual, written, musical, etc.).  It’s the one thing that binds all of humanity. Even dictators and despots appreciate great art.” – Preston Craig

The strong beliefs held in unjustified statements for humanity and he continuously finds new ways to get these statements across.   It is his creativity and attention to these statements that spark interests that creates change to be reflected upon.

All of his works have a keen attention to detail displaying realism even in a fantasy world. Although the use of acrylics is preferred as he manipulates the behavior as if they were oils, his creativity and talent disperse into not only paintings but also his drawings and digital works of art.  Like humans, his creations are full of layers and can be peeled back in contemplation to the reasons these pieces were created and what significance they have to society.

Preston Craig is an entrepreneur with a small business that for the human race should be greatly appreciated.   While his main goal is to make “Twisted TeddysTM” a viable company, he hopes to create a large presence in the marketplace and continues to invest in his creative energies and continue in his planned direction.  This direction includes finding great success as an artist and entrepreneur and fund art programs in areas of society that lack the attention.

It takes a large heart, compassion and forgiveness in this world we love in.   We have all seen some dark and have all entered light, but to embrace the acceptance of reality within our realm will be the only true fight for justice. 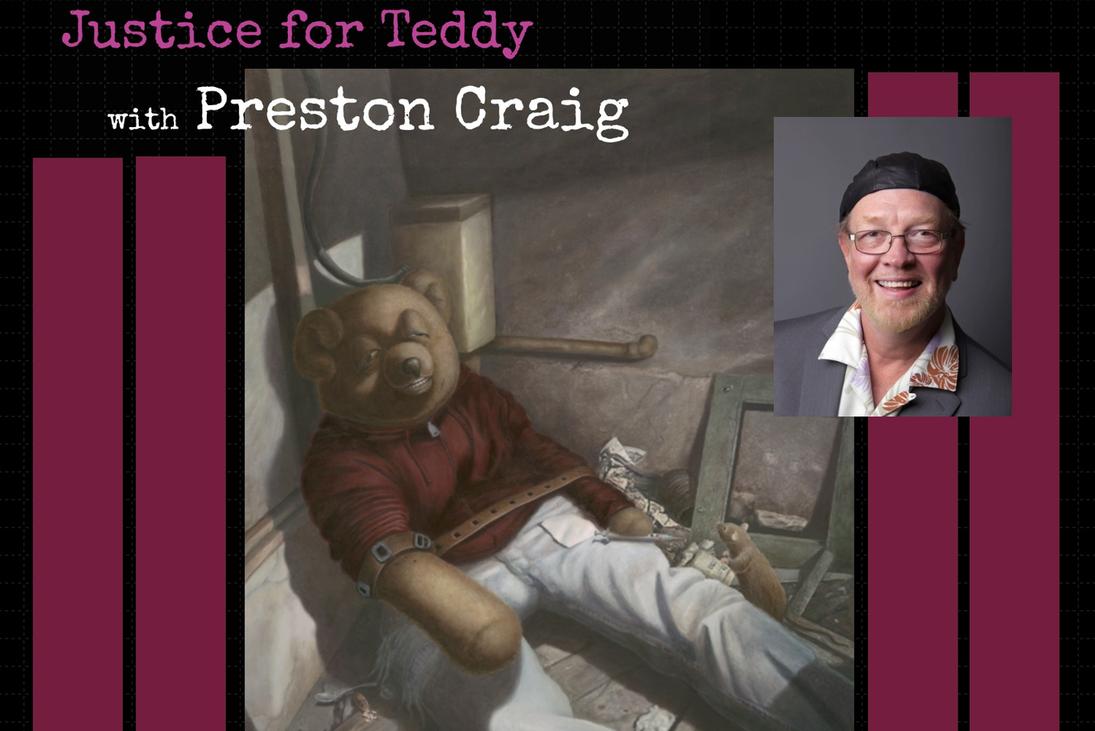