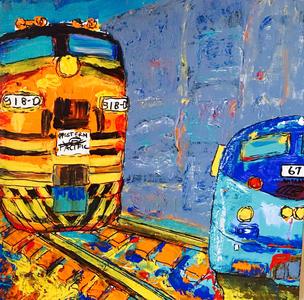 "Beyond The Tracks" with Geoffrey Levitt

Born in Hollywood, California Geoffrey Levitt leaves fresh footprints for capability to the artistic masses and brings much success to his creative world.  Not only is he an innovative creator and humble entrepreneur in the art scene, he also leaves his mark on life by giving back to his surroundings.

Art admirers and artists see Geoffrey Levitt’s creations as pure genius from his abstract studies to his colorful insights.  However, contrary to what the world around him sees, Geoffrey shares that he finds it a struggle to learn how to paint well. In consistently practicing techniques throughout the years, the biggest influence in his process has been Pablo Picasso and his father Edward Levitt. Geoffrey’s father inspired the use of color, as he was an animation artist in Hollywood while Picasso influenced the morphing of shapes and lines.

One influential artist admired by Geoffrey in high school was Alexander Calder sculpting innovation from the early 1900s and being the originator of the mobile.   Calder influenced Geoffrey in his lifelong and current art works.  With very contemporary lines and curves, they both share their talent of passion and balance in simplifying basic shapes.

“In High School I discovered the work of Alexander Calder.  Using one of his early mobiles as a model, I made one for a geometry project, and I have been making all kinds of art since.  The fact that mobiles, as their name implies, are moving sculptures (kinetic) has intrigued me and sustained my interest in the medium over the years.” – Geoffrey Levitt

Having admired the geometric shapes from Calder and his fathers meticulous consistency with the use of color, Geoffrey strives to have his art be considered as museum quality while enjoying every part of the artistic process.  He continues to create to enhance his artistic talents and becoming well established in meeting his artistic goals.

One of Geoffrey’s newer projects incorporating shapes and bold colors is his “Train Series”.  He offers the world a peek from the other side of the tracks with not only visual delights of abstracted metal, but the thought behind it.  While representing a sense of monumentality of railroad engines and cars to their viewers, there is a back-story bringing reason behind their production.  In relation to his trains and the theme of changing the world Geoffrey explains,

“We as a society will need to resurrect our use of trains, not only for shipping goods, but for public transportation as well.  The carbon footprint of trains is considerably lower than air travel and travel by cars.  It is more relaxing than travel in our cars and certainty more pleasant than flying.  And the death rate from trains is much lower than driving.  Not to mention Congestion.” – Geoffrey Levitt

It seems that Geoffrey is already ahead of game with thoughts going forward on change in culture while cherishing environment.  I asked him how art changes the world and he shared,

“Art has a way of cleverly getting its message across; sometimes subtle, sometimes overt.  Our world needs all these ways and more to inform people of the struggles and problems we face as a human race while our environment changes drastically and threatens our very survival.  Art is important process of securing better and a more livable world.”

With the passion for making the world a better place and sharing his own art for the justice of culture, Geoffrey stated how it would be in the world without art,

“Art has been one of our great accomplishments as a species.  Without it culture, as we know it would not exist.  It has been made and cherished throughout our history.   A world without art would be a boring and dull place to live.”

One passion in his life that keeps him motivated is  music and while he majored in college playing the Viola, he currently finds enjoyment in playing the Mountain Dulcimer.  Whatever Geoffrey’s passions are, his art exudes innovated ideas, consistency, progression and success.​  His art will always be memorable in its creative process.

“I want to be known most for the creativity I brought to my life.  Solving problems is a creative endeavor and the process of making art is nothing but solving a set of problems.” – Geoffrey Levitt 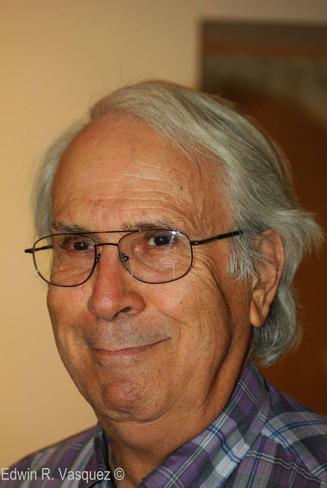 (Above) "Big and Little Brothers" by Geoffrey Levitt